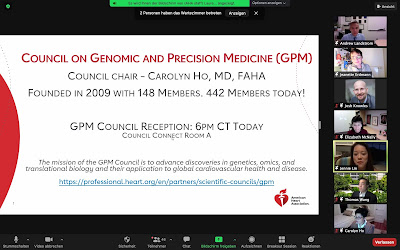 Last week I was invited to attend an online event organized by the "Genomic and Precision Medicine" (GPM) Early Career Committee.

Due to the participation of members from all over the world, it was initially a little difficult to find a suitable time. So for some participants the working day just ended, for others the day started very early, and for me it was the middle of the night.

Which, to be honest, didn't bother me much, because I like to "work" very late.

The meeting was meant to be a "networking event" and the experienced scientists were supposed to give the younger scientists tips for their career.
Within a short moment at the very beginning of the event I realized that I was probably almost the oldest of the "Senior Faculty".

I felt like getting older in the blink of an eye. ;-)

But a few minutes later I enjoyed the Q&As, the vivid discussions about career plannings, mentor-ship and establishment of hybrid labs.