on June 10, 2020
The European Society of Human Genetics (ESHG) organizes each year a conference with some thousand participants. Last year in Gothenburg more than 3000 people met to talk about human genetics in huge lecture halls. This year the conference was planned to take place in Berlin and I (Franziska) was accepted to present my poster. But because of the SARS-CoV2 pandemic it came different as planned. Many other conferences were postponed or canceled. But the ESHG managed to organize a virtual conference under the motto: “ESHG 2020.2 – LIVE IN YOUR LIVING ROOM.”.

Since other events were canceled, I was joined by Anja, Ilyas, Jeanette, Marlon, Noor, Stephanie and Zouhair.

The meeting started on June 6th and was packed with highly interesting talks about a variety of topics. In addition to livestreams in up to five simultaneous session rooms, we were able to watch on-demand sessions and e-poster presentations. And all talks and presentations are viewable for additional two weeks after the end of the conference which is a big advantage of the virtual format.
On the first day we experienced some technical issues. First more than 5000 participants at once were too much for the website and in the evening the streaming service that was used began with installing software updates during a running session. But the technical support was able to fix these issues and I think everybody was expecting some technical issues. After the first day there were no major problems and all the livestreams ran very smoothly. 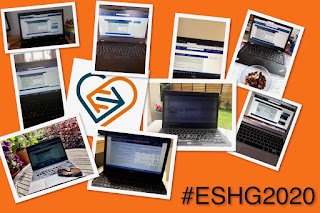 For every conference the poster viewing with authors is a highly interactive session. Since a normal poster session was of course not possible, interactive e-poster sessions took the place.  First of all it was a new experience to produce an e-poster that could consist of up to 5 slides and audio tracks. The e-posters were uploaded to the website one week before the conference and there were three viewing sessions with authors during the conference. But instead of standing next to your poster and talking to people who are interested in your research, there was a chat next to every e-poster and everybody was able to send messages to the presenter or to all. As expected it was not as interactive as known from in-person events, but at least it was possible to interact and present my project.

All in all we all enjoyed the virtual conference and the possibility to re-watch talks and on-demand sessions. Of course it is not the same as in-person meetings but we hope that in the next years online participation is kept as an option.