on June 15, 2015
Last week, our latest paper got online, published in the European Journal of Human Genetics. In this study, we investigated how many Coronary Artery Disease (CAD) patients carry potential familial hypercholesterolemia (FH)-causing variants. 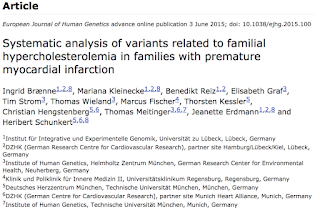  FH is an autosomal-dominant disease that leads to markedly elevated low-density lipoprotein cholesterol (LDLC) levels and increased risk for CAD myocardial infarction (MI). Despite the knowledge of the FH candidate genes, it is, however, largely under-diagnosed in European countries. One explanation for this is that FH might be overseen in the large number of CAD patients.

FH is mainly caused by variants in the LDLR gene. In addition the APOB and the PCSK9 are known candidate genes. STAP1 has recently been proposed as a fourth gene causing FH. In our study, we screened 255 CAD patients for variants in the four known FH genes. We looked for conserved, rare and deleterious variants using exome-sequencing data. Each identified variant was evaluated by co-segregation with FH in the family of the screened CAD patient. In total, we found that five percent of the studied CAD patients had potential disease-causing variants in one of the four genes. The frequency of FH in the general population lies around 1 in 500, in our study sample we found potential FH-causing variants at a much higher frequency (1 in 20). In addition, our study revealed several family members also carrying the potential FH-causing variant. Given the strong clinical implication of FH, our study clearly underline the need for systematic screening. Not only can FH screening enable an early diagnosis but also a timely preventive treatment of their variant carrying family members.

In our article, we also highlight a second important finding. We found that several reported FH-causing variants could not be validated in our study. This clearly demonstrates that each variant needs to be carefully evaluated, even if it is described as causal elsewhere. In our work we showed that co-segregation studies is one way to rule out potential benign variants.