on June 19, 2015
After two of us (Benedikt and Ingrid) visited the European Society of Human Genetics (ESHG) Meeting in Milan last year, we decided, we would really love to go to the next Meeting too, as it was really fascinating and informative. So this year a week ago (with Mariana this time) we attended the ESHG, which was held in the lovely city of Glasgow. Our high expectations were far from being disappointed.

We traveled with five friends and colleagues from the institute of human genetics and three from the institute of neurogenetics from Hamburg to Glasgow. All but the neurogenetics institute traveled together so we were a rather big group compared to last time. At the connecting flight in Amsterdam, we saw we were not the only ones. On the Friday evening Amsterdam-Glasgow flight, most passengers were ESHG attendees. Already at the gate, we met many familial faces, and the sheer amount of poster rolls in the overhead lockers revealed the others. 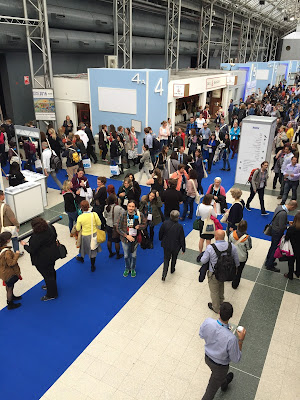 The ESHG meeting is clearly one of the best international meetings for human geneticists. There are so many excellent talks on so many interesting topics that it is hard to choose the right session. We had less trouble than last year though. The parallel sessions were obviously planned based on interest groups. Hence, with only a few colliding talks, we had four meeting days packed with interesting sessions. This is why we love science!


We were impressed by the data presented by some of the groups. As sequencing clearly becomes more and more feasible, more and more genomes are being analyzed. It is really impressive how many exomes have been sequenced and added to databases as for example the ExAC data base. But as sequencing becomes more and more everyday life, we also face new challenges. There are not only technical but also ethical questions. Hence, the ESHG dedicated several talks and sessions to discuss these issues. 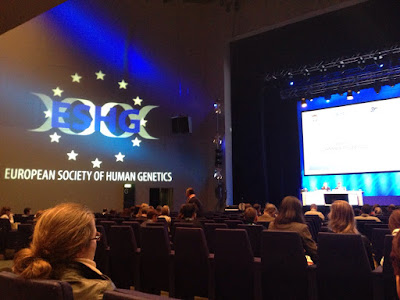 We presented three posters. Benedikt had a poster about the population specific effects of rare potential causal variants; Mariana about Coronary Artery Disease genes and the frequency of rare potential causal variants in these genes; and Ingrid about the frequency of Hypercholesterolemia in CAD patients (recently published in EJHG). The three of us all had great discussions during the poster sessions. It was really busy and hence so much fun. Wonder whether the lively poster discussions had something to do with the traditional Scottish weather. 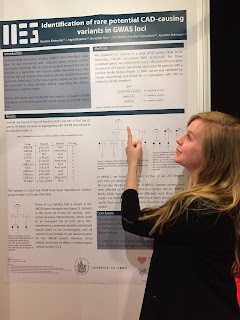 After the long days we managed to enjoy some further bonding and networking with our dear colleagues while trying delicious UK food (as fish and chips) and of course we had to try some typical scottish whisky. A really great opportunity to get in contact with others was the networking mixer at the Glasgow science center.  We recommend this to every Glasgow visitor. It was great fun to watch all those geneticists exploring all the experiments which are clearly not only interesting for kids. Overall we can look back on 5 amazing days full of interesting talks and meeting friendly people from all over the world: Thanks for that ESHG, we will hopefully see you again next year! 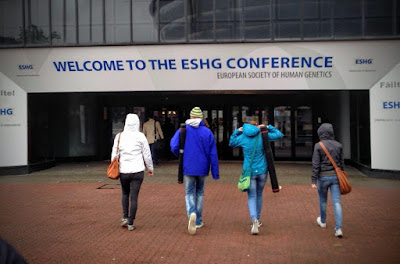