on March 21, 2015
First of all, it was nice to see some of the IIEG people during the Leduq video conference (VC) last Monday.
Shortly before the end of the VC I had to leave to finish work in the Lab. After that I had to catch the Bus to the train station and than the train to San Diego (Surrento Valley).
Here started my 1 day adventure: Unexpectedly the bus was late and I missed the first train to San Diego. I bought the ticket for the second train. But this time again the train itself had nearly 1 hr 30 min delay. It seems there were some connections problems. Any way, these problems seems to be every where and not only with the DB in Germany.
Due to that delay I arrived in San Diego at 11: 20 pm. I tried to call the cab (Taxi). Nobody answered my call, except one who said he needs at least 3 to 4 Hours to come and pick me up.
Hmmm...after thinking, thinking...and thinking I decided to walk to the hotel using the mobile phone GPS. It helped me a lot but suddenly, on the half of my way, it switched off because the battery was empty.
In the middle of the night I kept walking, sometimes it was completely dark and creepy because I couldn´t see any thing or met any one. I just followed my instinct.
Nobody was on my way to ask if i´m taking the right or wrong direction to the Hotel. You know, even some times hoping the police will drive around and may be take me to the hotel, which seems crazy. But nothing!
Finally I was so happy to see the sign of the Hotel. I arrived very late early in the morning to the Hotel and happy to go sleep as soon as possible. BUT the story didn’t have an End yet.....
Unexpectedly I couldn't find anyone at the reception and the door was closed.
After more than 1 hour waiting one guy from the cleaning staff appeare who than called the reception guy to ask for my reservation.
Finally, (with no further surprises) I got the key for my room and went directly to bed.
Deadly tired I had to wake up after only 3 hours sleep because I had to meet the people from the Lab to start the experiments.
Even without sleep and very tired I enjoyed to join these nice people here in the Lab who helped me a lot. For those who are interested in research: the project here in San Diego is about the differentiation of huIPS cells to SMCs.

So far i still didn't regret to take this opportunity, which let me to learn more about myself and how to deal with unexpected situations.
Even if it was scary and full with risks, alone in the night in USA...It ended up with a happy End and added more experience in the USA. I have to stop now and check out to go back to LA. Hope no more surprises.  :-) 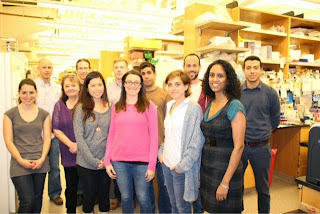 Here, I would like to thank the guys in San Diego for the nice stay, the help, the nice cooperation and for everything... AND happy to see you again.
Many Thanks goes also to both, Prof. Ali Torkamani (Director of Genome Informatics and Drug Discovery) and Prof. Kristin Baldwin (http://baldwin.scripps.edu/lab-members.html) for coordination and giving me the chance to visit their Lab. 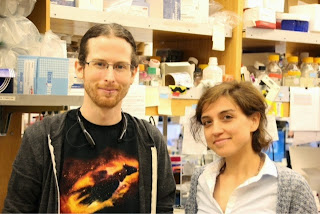 Also many thanks to Natasha (not in the pic), Will (left) and Valentina (right) for supervising and transportation.

Of course many many thanks to Jeanette and Zouhair for letting get me in touch with the group here and for this chance to learn more about iPS-derived SMCs and calcification.
RA