on July 17, 2014
Together with colleagues from all over the world we finally finished a large-scale study mainly based on CARDIoGRAM data and we identified highly interesting novel networks and pathways associated with coronary artery disease (CAD).

The article can be found here: paper 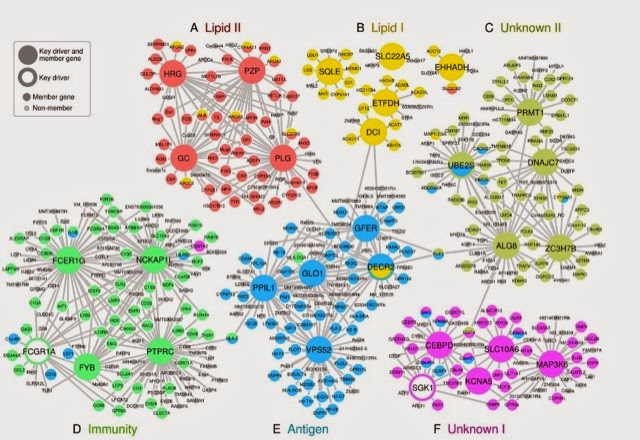 Here comes the Authors Summary from Plos Genetics:
Sudden death due to heart attack ranks among the top causes of death in the world, and family studies have shown that genetics has a substantial effect on heart disease risk. Recent studies suggest that multiple genetic factors each with modest effects are necessary for the development of CAD, but the genes and molecular processes involved remain poorly understood. We conducted an integrative genomics study where we used the information of gene-gene interactions to capture groups of genes that are most likely to increase heart disease risk. We not only confirmed the importance of several known CAD risk processes such as the metabolism and transport of cholesterol, immune response, and blood coagulation, but also revealed many novel processes such as neuroprotection, cell cycle, and proteolysis that were not previously implicated in CAD. In particular, we highlight several genes such as GLO1with key regulatory roles within these processes not detected by the first wave of genetic analyses. These results highlight the value of integrating population genetic data with diverse resources that functionally annotate the human genome. Such integration facilitates the identification of novel molecular processes involved in the pathogenesis of CAD as well as potential novel targets for the development of efficacious therapeutic interventions.

We are pleased to share with you that Nature Genetics Review selected our PLOS Genetics paper as a Research Highlight.
See the article “Piecing together the puzzle of coronary artery disease”: