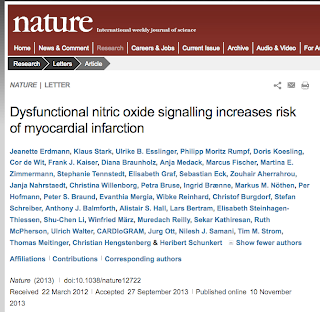 The pdf is available here AOP

Starting with a severely affected family we have identified a novel mechanism leading to myocardial infarction. Specifically, we detected two mutations that jointly blocked nitric oxide signalling in platelets leading to accelerated thrombus formation. Another variant of the same enzyme, affecting a large proportion of the population, was also found to affect coronary risk, albeit to a much lesser extend.

Background
The family was identified as part of the German Myocardial Infarction Family Study (GerMIFS). The aim of the GerMIFS was to analyse MI families to unravel the genetic components of this life-threatening disease. Until today the GerMIFS includes more than 7,500 probands with follow-up data of more than 10 years. An special emphasis of the research agenda of the GerMIFS is the identification and analysis of rare extended families presenting more than 5, sometimes even more than 20 affected family members. Recently, next-generation-sequencing became available which allows the identification of disease-causing genetic aberrations (so-called mutations) in such families leading to new insights into pathomechanisms.

Here, we sequenced, in cooperation with colleagues at the Helmholtz-Zentrum Munich (Tim Strom and Thomas Meitinger), the complete coding regions of the genome (the so-called “exome“) of three affected cousins and looked for mutations shared by these family members and absent in healthy controls. Starting with more than 30.000 of such genetic variants we were left in the end with two mutations in GUCY1A3 and CCT7 encoding for proteins that actually interact functionally in an enzyme called soluble guanylyl cyclase (sGC). In fact, if both mutations were found in a family member the effect was a dysfunctional enzyme incapable of responding to nitric oxide stimulation. The effect was by far less if only one of the the mutations were found in a family member.

A subunit of the enzyme soluble guanylyl cyclase (sGC) that is well known to be activated by nitric oxide is encoded by GUCY1A. The second mutation was found in the gene CCT7 which encodes a chaperone protein required for proper folding of newly synthetized cellular proteins. In a cell-based approach, we demonstrated in cooperation with cellular biologists (Frank Kaiser from the Institute of Human Genetics of the University of Lübeck and Doris Koesling from the Institute of Pharmacology and Toxicology of the University of Bochum) that lack of this chaperone protein reduces the cellular amount of sGC resulting in loss of sGC function. Thus, both proteins are required for intact nitric oxide signalling. An important target of nitric oxide signalling are platelets in which aggregation is inhibited by this intercellular messenger. These cells can be easily isolated from the blood and, indeed, were found to be non-responsive to nitric oxide stimulation due to a substantial reduction of sGC protein levels in family members carrying both mutations. Likewise, all family members carrying both mutations developed coronary disease. Reversing this defect may provide a new therapeutic target for reducing the risk of myocardial infarction.

The importance of the nitric oxide signalling pathway on the functional level was verified by a cooperation with Cor de Wit, a physiologist from the Institute of Physiology of the University of Lübeck, who demonstrated accelerated platelet aggregation in mice deficient for this critical subunit of the sGC. The finding in the mice which mimicks the situation in double mutation carriers may provide the mechanistic link between dysfunctional nitric oxide signalling and myocardial infarction since platelet aggregation and thrombus formation may be unopposed in affected individuals rendering them prone for this fatal disease.

Interestingly, genetic data of more than 30.000 MI patients and 80.000 controls pulled together from the international consortium CARDIoGRAM provide evidence that not only very rare mutations in GUCY1A3 lead to MI but also common variants in this gene increases MI risk substantially.
JE